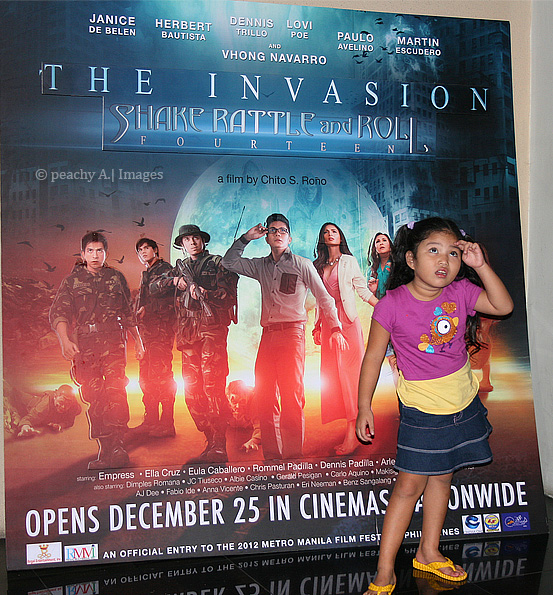 Ykaie is such a fan of Vhong Navarro. So when she saw that Shake, Rattle and Roll 14 stars Vhong Navarro in one of the episodes she didn’t stop asking me to go and see the movie. The movie I wanted to see was about a musician who loves his flutes but I had to give in to my adorable daughter.

One mall-hopping day, when we had some time to spare, we did see the movie. As usual, it’s a three-episode film.

An uncle leaves an inheritance to his nephews and nieces. Once the cousins are gathered for the reading of the will, they learn that their uncle does not only leave them a huge amount of money but he also wants them to have his collection of comic books. And that there is a condition with the inheritance, they will only get it after a month if they are still alive. The cousins soon realize the horrors that the comics are capable of.

A simple military operation, turns into carnage when a group of soldiers encounters an unexplained phenomenon in the jungle. The leader of the platoon, Martin Barrientos (Dennis Trillo), being the last man standing tries to combat his former men, who are now living dead, in one grueling battle for survival.

Hank and Kate, together with others who are holed up in a mall try to escape the sea-animal creatures that appeared following an explosion. This is the story I least liked because it’s not the least bit scary.