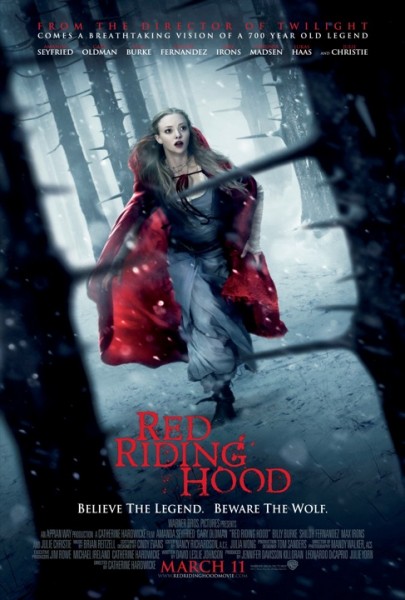 The movie opens in a small town at the edge of the forest. The town has  a “big bad wolf problem”, well, in this case a werewolf problem. The werewolf didn’t attack the townspeople in exchange of animal sacrifices during the full moon but that set-up was disprupted when Valerie’s sister was slain by the beast one day. So the local priest sent for the holy werewolf slayer Father Solomon {Gary Oldman} to set things right but just sent the villagers in fear when he told them that anyone in the village could be the werewolf.

Valerie {Amanda Seyfried}, is the prettiest girl in the village and has a secret relationship with her bff/childhood sweetheart Peter {Shiloh Fernandez} but her parents already arranged plans for her to marry the rich Henry {Max Irons}. The movie revolves around Valerie’s lovelife and the village’s werewolf attacks.

At the end, the wolf turned out to be Valerie’s father who killed her own mother/Valerie’s grandma because she already realized that the werewolf attacking the village was her own son. Peter {the woodsman} and Valerie was able to kill the werewolf only to find out that Peter was bitten. Since he was bitten at the time of the blood moon, he will turn into a wolf as well.

There’s a lot of teen-drama very much similar to Twilight but different. It captured the essence of the classic fairy tale but not to my liking. Ykaie just loved scary movies that’s why she was engrossed with the film. It was a fun watch for me, though.

I forgot to take a picture of Ykaie with the Red Riding Hood poster so I had to settle with the original poster.