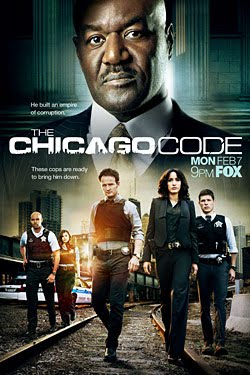 I finished watching all the episodes of Blue Bloods yesterday afternoon. Wanting more, I browsed online for a new crime/drama series I could watch and I found THIS – The Chicago Code.

I only downloaded the pilot episode and halfway into the 42-minute show, I know I’m hooked. So from New York, I go to Chicago to follow these officers fight  the crimes on the streets and expose the corruption in the city headed by Alderman Gibbons {Delroy Lindo}

Before this, I didn’t know there was a government position called an ALDERMAN.

An alderman is a member of a municipal assembly or council in many jurisdictions. The term may be titular, denoting a high-ranking member of a borough or county council, or denote a council member chosen by the elected members themselves rather than by popular vote.

Anyway, I didn’t know any of the actors and actresses in this series but I’m starting to love all of them. I’m in episode four now and I can’t wait for the upcoming episodes.