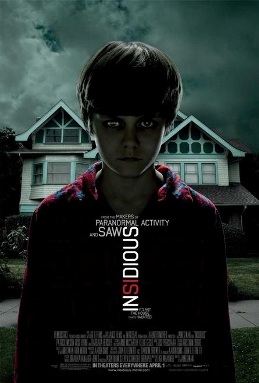 I am so glad to have watched this the other day when peanutbutter♥ was still here. The movie scared the hell out of me. It’s not your standard scary movie and would really require some thought but it is very scary!

It even haunted me a few hours later when I got up from bed to pee in the wee hours of the morning. I was thinking the demon there would show up in the dark while I’m on my way to the toilet. yeah, it’s THAT scary.

Anyway, insidious is about a boy who could do astral projections. Since he’s not an expert in his ability, he was trapped in a realm called The Further. And because he’s left his body vacant, a lot of lost and evil souls wanted to enter his body.

Watch it. It will scare the hell out of you.