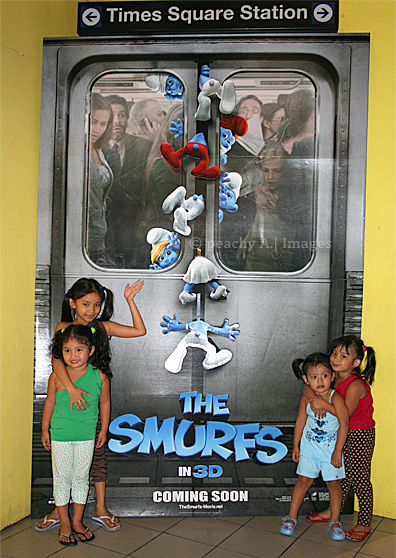 It was my favorite saturday morning cartoons….and since watching the movie, I became hooked to the Smurfs and Co. game in Facebook. I wanted my daughter and my nieces to experience what I did when I was a child so we went ahead and watched it last week.

We didn’t watch in 3D. I figured it wouldn’t matter as much because it wasn’t pure action nor pure animation. The setting took place in the Big Apple where the six smurfs namely: Papa, Gutsy, Brainy, Clumsy, Grouchy and Smurfette, was taken after going through the water portal to escape the evil wizard Gargamel.

The smurfs met a young couple who was expecting a baby. The couple was played by Neil Patrick Harris and Jayma Mays.

Did you know I had a crush on Neil Patrick Harris back in his Doogie Howser days? Yeah,I did,  peanutbutter♥ said I’m a little geeky….I found him cute back then.

Anyway, through a lot of humor, action and a little suspense, Patrick Winslow helped the Smurfs defeat Gargamel and in turn the Smurfs helped the couple through their issue on having a baby and being parents.

Nice movie, I should say. It’s a movie I would like my next child to see…