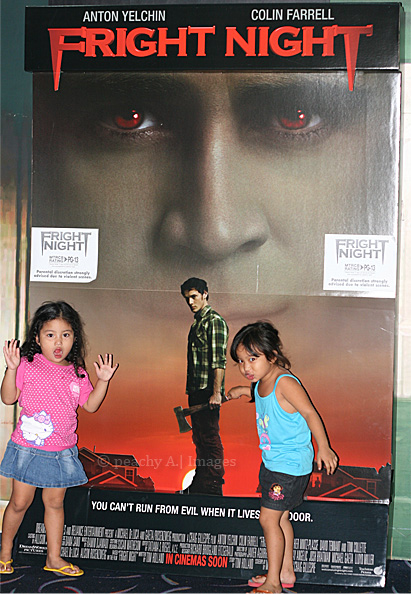 After eating a delicious meal of pancakes and flavored butters, we headed to Gateway mall to watch Fright Night. It’s a PG-13 movie so the kids,who love love love being scared was allowed to watch it.

I remembered being scared to my wits by Fright Night back in 1985. This year, it scared Ykaie……

…and it also scared those two gay friends who sits at the back and shrieks like firetruck sirens.

Anyway, this film is all about Charley Brewster (Yelchin) who finds out that his new neighbor Jerry Danridge {Farrell} is a vampire and is responsible for the recent deaths in Las Vegas, Nevada.

He then makes it his mission to kill Jerry but he needed the help of Peter Vincent (David Tennant), a magician  who is supposedly an expert on vampires. Charley goes to fight Jerry at his house where Peter decides to join him after all. The two are led into Jerry’s basement where they are attacked by many of Jerry’s victims, now vampires, including Amy. Charley, having outfitted himself in a flame-retardant suit, lights himself on fire in order to burn and disorient Jerry while he tries to stake him. Peter assists him by shooting a hole in the floor above to allow sunlight in which burns Jerry. Charley quickly stabs Jerry in the heart, killing him instantly and returning his victims to their human form.

It was not a scary film for me but it gives out some surprises all throughout the movie that will surely make you scream and jump.