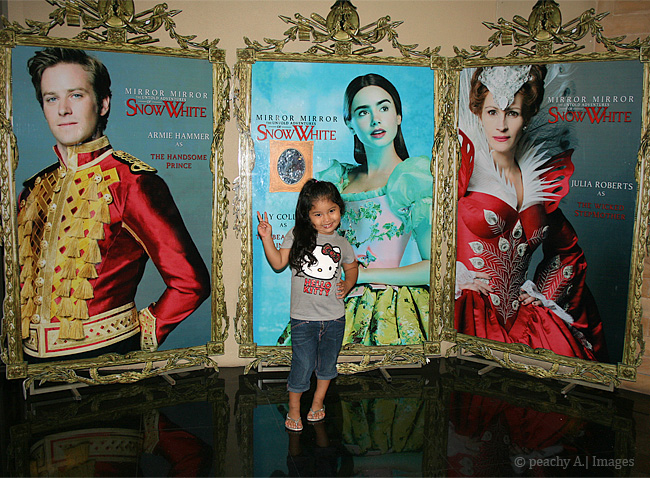 Being avid horror movie fans, we went to the mall to watch Corazon: Ang Unang Aswang. It was only there when sis and I found out that it was an R-13 movie. Good thing Mirror, Mirror is already shown because I’d also like for Ykaie to see a Snow White story that is different from Disney’s version.

Mirror Mirror is a funny and comedic version of Snow White perfect for the whole family because there really is nothing violent or sinister in the whole movie. All the elements of the real story of Snow White is there but it was told and shown with a twist.

Lily Collins starred as Snow White. Julia Roberts as the Evil Queen. Can you imagine how evil Julia Roberts can get? She’s still cute even when portraying evil. And Armie Hammer starred as Prince James.

I also think that it has a Bollywood/Indian aspect to the setting. The castle is built in gold and white,and very much reminds me of the Taj Mahal. And the closing song? The color of the clothes and the way they sang shouts Bollywood.

It was something to love♥.