I just finished watching the season finale of Spartacus Vengeance entitled “Wrath of the Gods“. 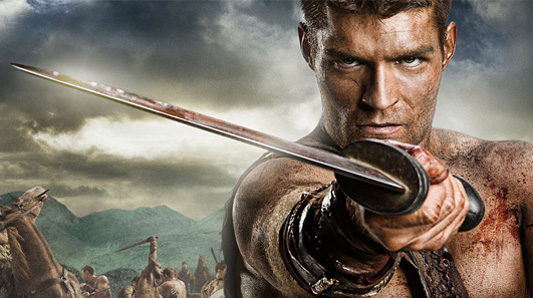 And while I fidget and shout and held my seat during the brutal but thrilling battle scenes, I also shed a few tears to the death of some of my favorite and not so favorite characters.

Let’s start with Mira, she received a lethal blow from an axe {OUCH!} from one of the Roman legions while they go and try to save Nemetes, Ludo, and Saxa from their stupid attempt to go after the Romans by themselves.

If you can remember, they were forced to go on top of Mt. Vesuvius short of supply. Glaber was waiting until they get hungry and weak before he attacks, securing advantage of the battle. What he didn’t know is that while  Spartacus grieves the death of Mira, he is also planning his way into winning this battle.

Ashur on the other hand is comtemplating on how he will claim the House of Batitus and turn it into his own: the House of Ashur.

While Ilithyia, anxious to keep Lucretia at her side when she returns to Rome with Glaber and their child uses Seppius’ bracelet to spin a tale of Ashur’s betrayal. Upon hearing this, Glaber had another thing in mind, he wanted neither of the two and Ilithya finds herself in charge of sending Lucretia to her death.

Ashur lost the favor of Glaber and was sent to Mt. Vesuvius as an errand, with a message to Spartacus. Knowing Ashur with a sharp tongue, he managed to talk himself into a fight with Crixus in which Naevia took place. The duel between Ashur and Naevia was steep, but Naevia managed to make a strategic cut to Ashur’s groin when all things seemed lost. She had a hard time cutting his head in one blow, though. She had to do it three times and Ashur’s head was sent to Glaber as a reply to his message.

While all this was happening, Ilythia was plotting Lucretia’s death. She saw an opening while Lucretia was throwing away her unflattering red wig in the terrace by the cliff. She was about to push Lucretia when her water broke. Lucretia took her to the bedroom and made like she’s gonna take care of everything  but came back bloodied, knife in hand. Apparently, she was just waiting for this time, the child’s birth. Just as the crazy woman that she’s supposed to be, she saw the child Ilithya has in her womb as the child the gods sent her so that she and her husband could  finally be family. She dove onto the cliff bearing the child in her hand. Lucretia, Ilithya and the baby died.

But the death where I truly shed a tear is Oenomaus’. He died fighting this Egyptian I hate, the one with the braid. He was fighting it with Gannicus and in his death, he finally called him “brother”, giving him the closure needs. This affirmed his allegiance with Spartacus and his cause.

This episode ended with Spartacus killing Glaber inside Lucius’ stronghold and when he did, there was a flashback of the memories of his wife Sura from their happy times together until her death at the carriage in the house of Batiatus. Sura’s death was finally avenged.

I can’t contain the surge of my emotion towards this last episode because I love each turn and twist in Spartacus.

According to my research, they will start filming for Season 3 next month {April 2012}, with a promise to be shown in November 2012.