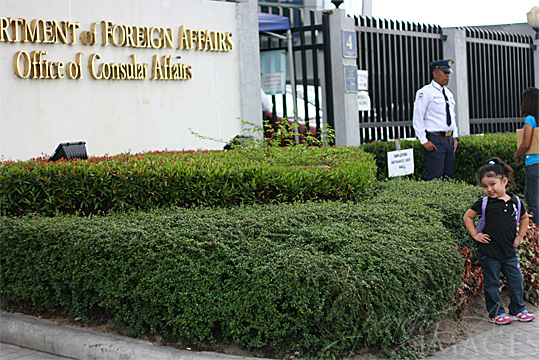 In two months time, peanutbutter♥ will be home for his annual vacation but unlike the previous year wherein we took a trip out of the country, this year we decided to travel locally. This reminded me that I should renew my passport as soon as possible. Should we decide to travel by March, there wouldn’t be any problem because my passport  is ready. Why? Because unlike passports Dallas which you can get on the same day that you applied for it, the regular processing of passport here in the Philippines will take 25 working days or a month if you include weekends. There won’t be any time if I renew it on the same month that peanutbutter♥ arrives.

I remembered two years ago, I accompanied Ykaie in the application of her passport. We came in at the Department of Foreign Affairs very early because we already knew that the line is gonna be long. We brought all the necessary documents and even some snacks for Ykaie. At three, it was her first passport application. I made sure I had a photocopy of everything.

The requirements that I brought are:

Everything went on as planned then it was time to take a photo. As expected amongst three year olds, she was very playful. The person who was going to take her passport photo talked to her so she would sit still and smile. She said, “alright, I’m just gonna take your picture..1…2…3…“. When she heard that she started making cute but wacky poses like what she does in our everyday normal photos. She had a peace sign right on her cheeks like this popular Korean pose. She even winked at the next shot. Everybody started smiling and some even giggled…The person taking the photo just indulged her a little more and took four wacky shots before telling her how she should pose for her passport photo.

It was hilarious. I didn’t know getting a passport  could be this fun.

-This is a sponsored post however, all the points and views are my own.-