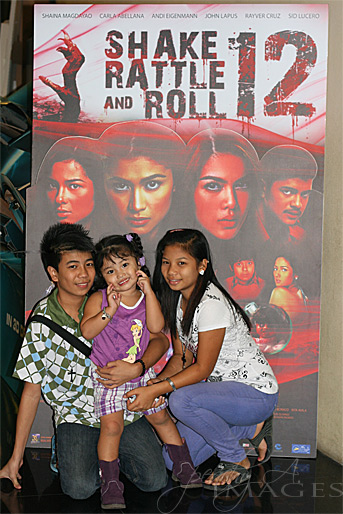 Since the kids love horror flicks ,we watched Shake,Rattle and Roll. This was last December, I just forgot to post it.

Shake, Rattle and Roll 12 is part of the Metro Manila Film Festival and I chose to watch it over the other horror flick,Dalaw because I can’t forget how the first Shake Rattle and Roll scared the bejeezus out me when I was younger.

As usual, the film breaks down in three stories:

First story was the Mamanyika or Mama doll. It’s about a doll possessed by the previous owner and was later found by an orphaned girl. It later turned into a monster and killed almost everyone in the girl’s family.

Second story was Isla Enkanto or Enchanted Island. It’s about a girl who wants to drown her broken heart away so she went with her friends to an island to enjoy themselves. The king of the evil fairies in the island wanted this girl to be his partner. So he enchants her and kills all the people in the island. This is my least liked story.

Third story was Punerarya. This was about the local vampires or aswangs putting up a funeral business so they can eat dead human flesh, instead and live in peace. I like this story the most.

Ykaie was very scared with the Mamanyika episode. I think I’m gonna see more of Shake, Rattle and Roll’s next episodes.