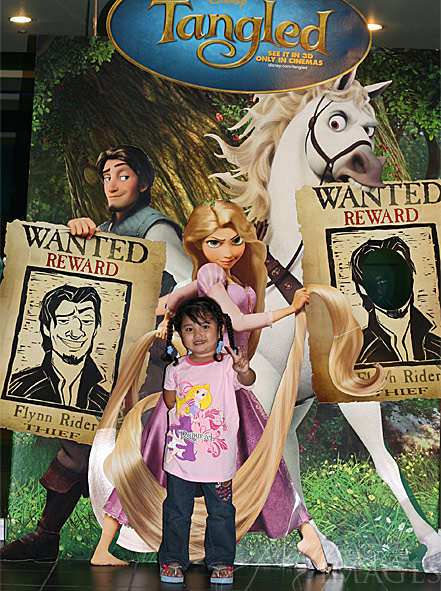 I love what Disney did with Tangled, the slightly modernized version of the Brother’s Grimm fairytale -Rapunzel. Its action, musical and comedy packed story captured the hearts of young and old audiences. I could tell even my ILs loved it!

Well, I absolutely loved it♥! I loved the character of Maximus the horse. He is hilarious!

In Disney’s version, there was a magic flower with rejuvenating and healing flowers which the evil witch {mother Gothel} uses to keep her young. When the queen got ill, the imperial guards were sent to look for this flower which when found was given to the queen. The queen was healed by the golden flower and gave birth to Rapunzel. Apparently, Rapunzel’s hair got the magic of the flower  so Mother Gothel stole her and kept her as a daughter. She locked Rapunzel in a tower and told her that’s to keep her safe. Her hair was never cut because it contains the power to keep the witch young.

When Rapunzel turned 18, she wanted to go out of the tower and see the flying lanterns that lit the sky every year on her birthday. The lanterns were for the lost princess. This is where Flynn Rider comes in to the picture. Flynn is a thief who stole the princess’s crown. He hid in the tower to avoid the imperial guards that was chasing him.  Rapunzel made a deal with him to take her out of the castle but then she later discovered that she is really the lost princess.

We watched this in 3D and that was a well-spent moolah for each of us.