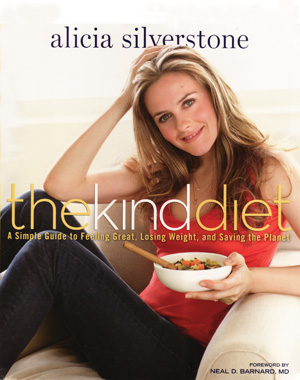 Alicia Silverstone published a book recently named The Kind Diet. This book encourages readers to switch to a plant-based diet which she guarantees will help you lose weight, feel great and have beautiful glowing skin.

Alicia Silverstone is vegan, this book is not only about being kind to the animal but…

“The kindness is about being truly kind to yourself first and letting yourself have the best health and look your best and feel your most vital.” 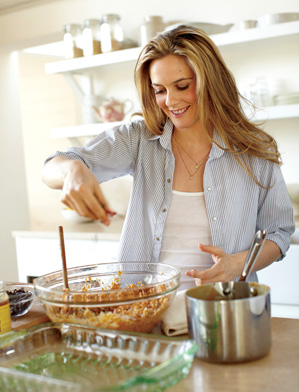 Here’s an excerpt from the book:

At 12, I went to my first acting class. I loved it. I loved being with all the older kids. I loved feeling like I could touch a different world, one that provided so much excitement and possibility. In acting class, I discovered my passion and began to consider the meaning of commitment. My commitment to not eating animals, however, was faltering. I’d wake up and declare, “I’m a vegetarian today!” but it was sort of hard to keep the resolution. I’d sit with a friend and she’d order a steak and I’d say, “Umm . . . are you going to finish that?” and take a bite. “But I thought you were a vegetarian!” she would remind me, and I’d counter with, “But you can’t eat all that. I don’t want it to go to waste!” I’d use any excuse. I was 18 when Clueless came out. Going through adolescence is strange enough, but becoming famous at the same time is really weird. It felt good to be recognized as an actor, but after Clueless, it was like I was sucked up into a hurricane. You might assume that fame brings you more friends, but I actually became very isolated. I was no longer simply a girl with the freedom to make mistakes and have fun. There was enormous pressure, which put me in full survival mode. And being in survival mode made it hard to stay in touch with my truth; I just couldn’t hear it anymore. Well, almost. One of the really good things about being a public person was that animal rights groups were hearing about my passion for their cause and began soliciting my help. I worked on all sorts of campaigns: antidissection, antifur, spay and neuter, as well as animal rescue. All of that stuff made perfect sense to me; in an otherwise chaotic life, these gestures were simple and straightforward and good. But, at that point, nobody had talked to me seriously about vegetarianism, and I was still doing my little dance back and forth. After a heart-wrenching day at an animal shelter, from which I took home a grand total of 11 dogs who were scheduled for execution, I found myself thinking, “Now what?” I was doing what I needed to do for my heart, but deep down I realized it wasn’t a practical solution; the next day the shelter would just put down another batch of dogs . . . and then another . . . and then another. I was committing my heart, soul, time, and pocketbook to these poor creatures, and that’s when it hit me: How could I spend so much energy saving one group of animals, then turn around and eat other ones? There was a fundamental hypocrisy in my thinking. Weren’t they all living beings? Why did we buy some of them cute little doggy beds while slaughtering others? I had to ask myself—in all seriousness—why don’t I just eat my dog?

That realization helped me make up my mind once and for all. I realized that, until I stopped using my dollars to purchase meat or other products that are created through violence or cruelty, the suffering would never end. It wouldn’t stop because I wanted it to. It wouldn’t stop because I wished it would. If I really wanted to end cruelty to animals, I had to boycott it completely. When I got home, I declared to my boyfriend (now husband), Christopher, “I’m going vegan. Forever. You don’t have to,” and I blathered on about wanting to save the pigs and the cows, and the logistics of living with the newly vegan me. I was getting all worked up planning everything out, and he looked at me and said in the sweetest way, “Baby, I don’t want to hurt the pigs either!” Which confirms that I am the luckiest girl on Earth, because he was totally on board with me from day one. That night we grilled the final steak in our freezer and sat down to our last nonvegan supper. It was quite solemn. I remember crossing myself like a Catholic even though I’m Jewish, because this was a total act of faith; I had never tried to cook without meat. I wasn’t sure I would ever eat a yummy meal again.But after only 2 weeks of being vegan, people were beginning to ask, “What is going on with you? You look amazing!” I was still eating lots of white pasta, french fries, and all sorts of sludgy things (in fact, I still do sometimes). All I’d given up was meat and dairy, and yet I began to look better in just 2 weeks! Something really wild was happening inside of me, too. I noticed that my whole body felt lighter. I was more vibrant and spunky. I felt like my heart had sort of opened a bit and my shoulders could relax, as if an overall softening had taken place. I no longer carried heavy animal protein in my body, which takes tons of energy to digest. Plus, I didn’t have the heaviness of the suffering in me; frightened animals produce lots of cortisol and adrenaline right before slaughter, and we can become stressed from eating their meat. 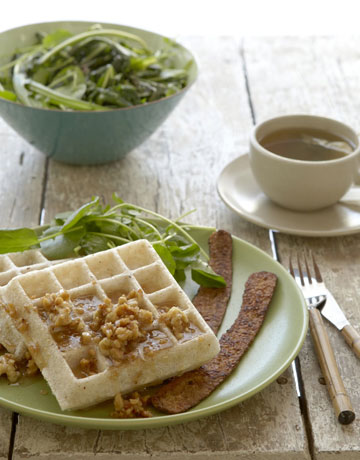 PREPARATION
1. Toast the walnuts in a dry skillet over medium heat until just starting to turn golden and fragrant, about 5 minutes, stirring often.
2. Transfer to a bowl to cool, and chop coarsely. Set aside.
3. Preheat a waffle iron. Cut a package of mochi into 3 large pieces, widthwise.
4. Slice each piece into long fingerlike pieces, about 1/4-inch wide.
5. Using 6 to 8 strips for each waffle, place the mochi strips on the hot, ungreased waffle iron and close the top. Cook until puffed and slightly crispy but not too hard and dry, about 3 minutes, or until your waffle iron signals that it’s done.
6. Remove the waffle and place on a plate. Do not stack the waffles because they will stick together.
7. While the waffles cook, combine the rice syrup with 3 tablespoons of water, lemon juice, and toasted walnuts in a saucepan.
8. Stir together over medium heat just until warmed. Pour over the waffles, and serve.
9. Serve and eat waffles as soon as possible — they are best hot and crispy. 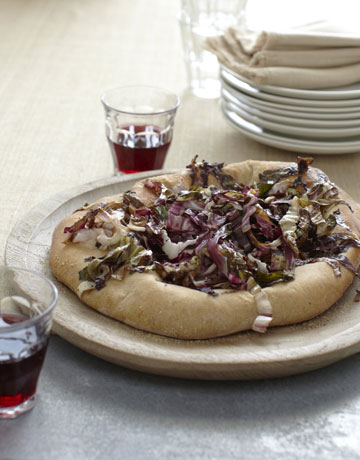 PREPARATION
1. Cut the radicchio in half, then slice each half crosswise into thin ribbons (as thin as possible!).
2. Dress with olive oil, salt, pepper, and a few dashes of white truffle oil to taste.
3. Preheat the oven to 415 degrees F.
4. Toast the pizza crust in the oven for 7 minutes or until it is heated through and slightly golden but not crunchy.
5. Scatter the dressed radicchio over the pizza crust and return to the oven for another 3 to 5 minutes, until the radicchio is warm and just starting to wilt. Serve immediately.