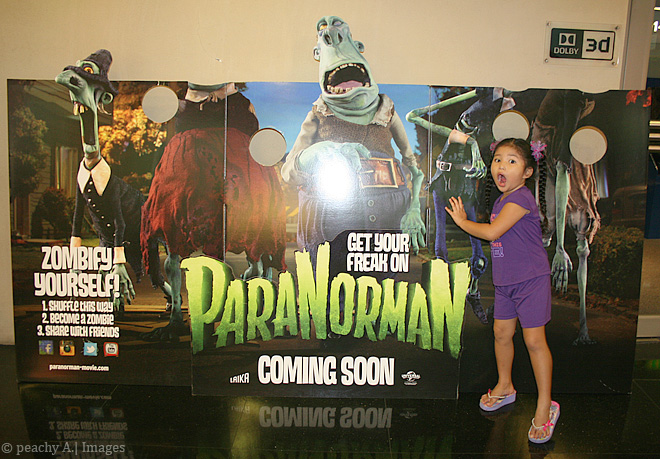 Note: This is the first movie that I didn’t have any movie food….just a cup of Strawberry Lemonade.

Ykaie enjoyed this movie as she did Coraline immensely.

ParaNorman is about a misunderstood boy named Norman Babcock , who is able to speak with the dead, including his late grandmother and various ghosts in town {Blithe Hollow}. However, no one in town believed this is true. They think that it’s just a product of his imagination, because of this he is frequently bullied in school. He found himself  being friends with a schoolmate, Neil Downe, who, like him is also bullied for  being fat.

One day, during the rehearsal of their school play commemorating the town’s witch execution of 300 years ago, while being instructed by their teacher who is wearing a plus size cocktail dress, Norman had a  vision of the town’s past and being pursued as a witch by the town’s citizenry. It was weird but he just shook it off, until he was confronted by his estranged, Mr. Prenderghast after school. He was told that his vision is a sign.

Norman didn’t believe this until the vision happened again. This time during the official school play. He made a public spectacle of himself much to his parents embarassment. He was grounded and depressed. The next day, at school, while locking himself in the washroom, he was comfronted by the ghost of his now deceased Uncle telling him that he should now do his duty of performing a ritual before sundown that night to prevent the town’s curse from happening.

This ended up with Norman saving his town from the centuries-old curse.

I’ve seen Ykaie display all emotions while watching this movie. She even cried towards the end