It’s Day 3 of our Taiwan Adventures. And we were excited because it’s the day we go to Hehuanshan Mountain. It’s one of the highest peak in Taiwan and snow, which is rare in the rest of Taiwan, is relatively common on Mount Hehuan during the winter months.

We woke up early because the van we rented will pick us up at 6am. Travel time to Hehuanshan is 4 hours… parang Manila to Baguio lang. After two hours, we came to this stopover to go to the restroom and eat some snacks. We bough coffee and french fries for the kids. We were looking forward to see snow when we booked this four months ago but the weather doesn’t permit us to see it at this time of the year. Yeah, we checked. So we weren’t expecting any . We were hoping at the last minute though..LOL!

Another restroom stop before going up the mountain … I don’t know what the sign says but I think it says we’re 2050 metres high? This is the highest 7-11 in Taiwan..LOL!

Grabe and travel paakyat! The zigzag road and looking over the side cliff made me dizzy!

After  hours of travel, we finally arrived at the Summit and It was 4-5º. Ang lamiiiggg!

We took photos and ate snacks we bought from the 7-11 where we stopped.

On the way down, we went to QingJing Farm where Green Green Grassland is.

Green Green Grassland is an open pasture ground for livestock such as sheep and cows to roam and graze freely. Visitors are able to see the animals up close and interact with them. There is an entrance fee of NT$160 (I think?) per person, discounted for seniors and students. 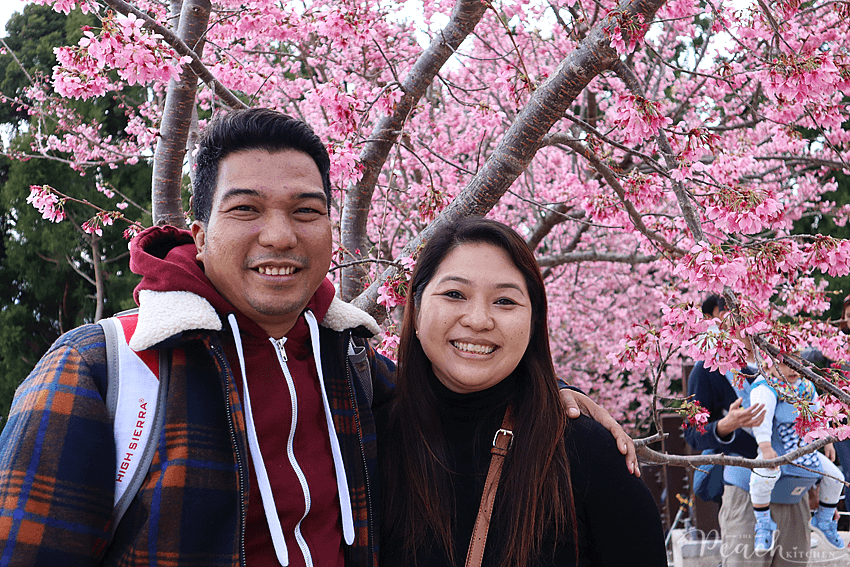 There were lots of Sakura in bloom!

Ykaie was able to pet and feed the sheep that’s roaming around. Twinkle was scared of the sheep but she was fascinated and couldn’t stop following and watching them. You can buy the feed from the vending machines around the area for NT$10 per box.

We weren’t really tired from our tour that day because our time was mostly spent on travel. So while everybody was resting, peanutbutter♥ and I decided to go around check out some more street food.

Milk Tea #3 is from Coco. At talagang sa Taiwan pa ako nga-Coco no? Well, walang pila… and I had to see what’s so special about it. Well, it’s not really that impressive..nothing special.

We saw this “Salt Chicken” on the street. We thought it looks delicious so we bought one. It’s like a salad, the vendor cut the chicken in pieces using a pair of scissors and you get to choose three kinds of veggies to go with it. We chose sea weed, young corn, and ampalaya leaves. He then mixed this with the veggies and drizzled some kind of dressing. I’m guessing one of the dressing’s ingredients is sesame oil.

Then we bought this Soup from this store that we passed by where a lot of people are lined up.

We ate the soup paired with the Salt Chicken for dinner and had Strawberries drizzled with condensed milk for dessert.

Check out our video: